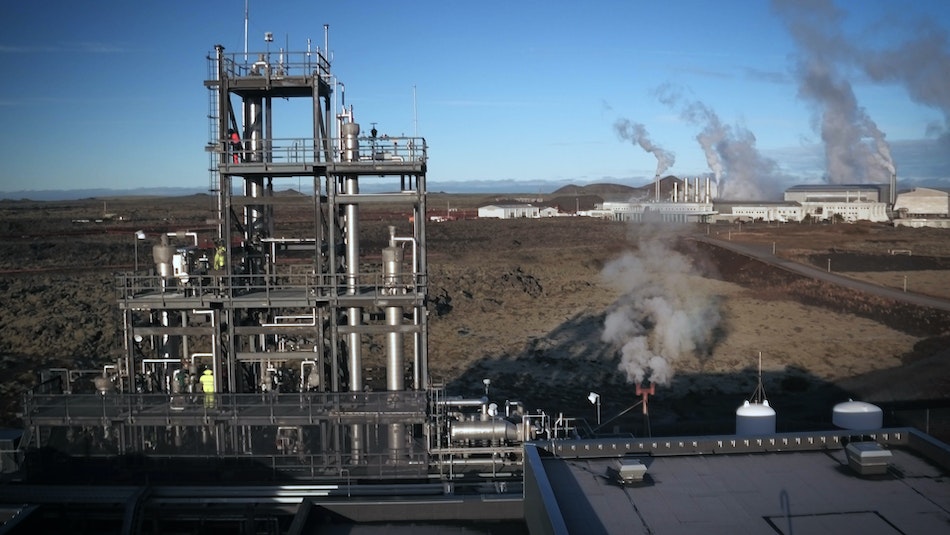 In many ways, the world is in a very tough spot right now. We know that the level of greenhouse gas emissions is unsustainable, we understand the consequences, and we have many smart ideas of what we should be doing. One of the challenges is to enable different industries to work collaboratively. Carbon Recycling International (CRI) is an innovative Icelandic company that has developed technology to bridge the gap between industries.

CRI produces a chemical feedstock and liquid fuel from waste CO2 through technological processes that use energy more efficiently and flexibly while supporting a circular industrial process that does not require expensive infrastructure changes.

Not far from Iceland's iconic Blue Lagoon and the Svartsengi Geothermal Power Plant, is CRI's George Olah Plant, named in honor of an influential Nobel prize winner in chemistry who promoted the concept of a circular economy. The maze of stainless-steel pipes, venting steam, and glow of lights give the plant the look of an experiment on a grand scale. And in a sense, that is precisely what it is. CRI takes carbon dioxide (CO2), which is naturally emitted from the Svartsengi Geothermal Power Plant's boreholes and converts this gas into liquid methanol through complex chemistry on an industrial scale. CRI calls its process Emissions to Liquids (ETL).

The ETL method requires hydrogen, produced using renewable electricity from the Svartsengi powerplant to split water molecules (H2O) through electrolysis to produce pure hydrogen and oxygen. The hydrogen and captured CO2 gas from the geothermal boreholes are compressed together and converted to renewable methanol in a catalytic chemical reactor. Methanol can be used on its own as a fuel source or as an essential ingredient for products such as paints, adhesives, insulation, plastic, and synthetic fibers. Even the resulting oxygen from electrolysis is valuable for aquaculture, hospitals, and many other industries.

The benefits of liquid methanol

The methanol produced using CRI's technology, trademarked as Vulcanol, represents a significant reduction in carbon intensity (often referred to as a carbon footprint). For example, the CO2 released during production and use of Vulcanol is 90% less than fossil fuels in the complete fuel life cycle from extraction to combustion. Moreover, methanol used as fuel helps reduce the worst forms of urban pollution because it cleanly combusts, forming no soot particulates or sulfur compounds and releasing only trace amounts of nitrous oxide. Interestingly, the carbon footprint is negative when using methanol to create products—as the CO2 becomes permanently bound.

Methanol from captured carbon represents a truly viable solution for a global energy transition and environmentally sustainable chemical production. While some in the private transport sector are electrifying, the challenge remains to power the more energy-intensive transport segments that consume most fuels, such as ships, large trucks, construction equipment, and aircraft. Pure methanol can power this equipment directly and is already fueling cars, trucks, and ships. For other engine types, such as aircraft, methanol can be further altered into the appropriate fuel using available technologies. CRI's ETL fuels are liquid, easy to handle, and are a solution for leveraging much of the existing transportation infrastructure while switching only the feedstock from oil and gas to electricity. Best of all, methanol can power both "traditional" internal combustion engines as well as fuel cells, which transform the fuel directly into electricity and complements the development of hybrid electric vehicles.

CRI's methanol is already widely used, ranging from wastewater treatment in Sweden to gasoline blending in the UK. CRI is currently collaborating with one of its shareholders, a Chinese automaker, with experiments using 100% methanol fuel in light cars. The Chinese and Indian governments have policies to support the increased use of methanol in all vehicles, to reduce urban air pollution.

CRI's George Olah Plant has the capacity to remove 5,600 tons of CO2 annually from the emissions of the Svartsengi Geothermal Power Plant and converts that into 4,000 tons of methanol, which is enough fuel to power nearly 2,500 regular cars.

In March of 2020, despite the challenges of the Covid pandemic, CRI delivered a complete process design package for a first-of-its-kind ETL plant in China to project partners Henan Shuncheng Group. The plant in Anyang, Henan Province, China, will be financed and owned by Shunli joint ventures and will recycle over 160,000 tons of CO2 industrial waste gases per year—equal to the emissions of nearly 60,000 cars. The Anyang plant, operational in early 2022, is a significant first step toward implementing CRI's ETL technology globally at a full commercial scale. In addition to providing the engineering and technology licensing for the ETL system, CRI will be responsible for delivering critical equipment and supporting the plant operators, including training staff and maintenance support. The Anyang plant will take hydrogen from waste gas, transforming it into methanol with low-carbon intensity, and sell it to the area's expanding chemical and transportation fuel markets.

CRI's ETL technology represents a practical and economical solution, supporting a circular system of renewable energy and recycled waste to replace fossil fuels. The George Olah Plant is a model of how the power, chemical processing, and transport industries can work together to reduce greenhouse gas emissions globally. CRI's innovations have leveraged the local geothermal resource base to create and test a technology that is now universally applicable. CRI seeks inspiration in the Icelandic mentality, which dictates that a population dependent on limited natural resources must constantly seek ways to reuse and utilize them more efficiently. This viewpoint has helped Icelanders to survive and thrive in the past and may help carry us into a sustainable future.